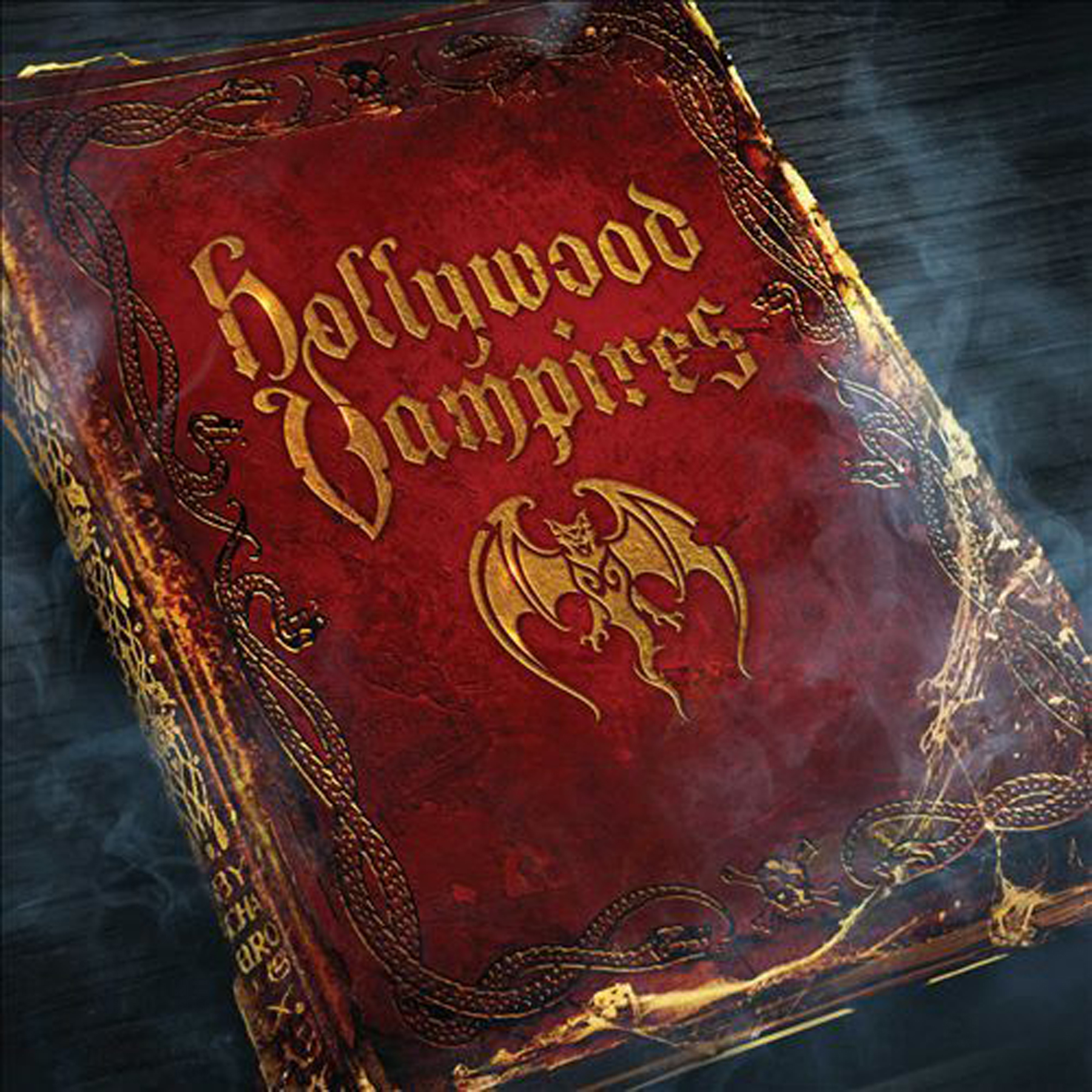 Though I am an avid connoisseur of all things Alice Cooper, as well as a fan of the Joe Perry Project (and the guy’s other, lesser known band, Aerosmith), I have had a falling out with Johnny Depp over the past 13 years or so (I suppose I can forgive him for DARK SHADOWS, but… THE LONE RANGER? No my friend… that is a step too far… a step too far, I say!) As you can imagine, I was trapped betwixt the proverbial rock and an unyielding hard spot. My hard-headedness nearly cost me the chance to hear what turned out to be a really cool record but, thanks to a dear friend and her Christmas spirit, I was soon the proud owner of HOLLYWOOD VAMPIRES… on magnificent black vinyl, no less. At first blush, this would appear to be the covers album that the Coop has been touting for the last few years… with a couple of tasty originals bookending the nostalgic trip down Alice’s drunken memory lane; apparently, though, that one’s still in the works. Oh… the record also features a butt-ton of special guests and old friends. Did I forget to mention that? 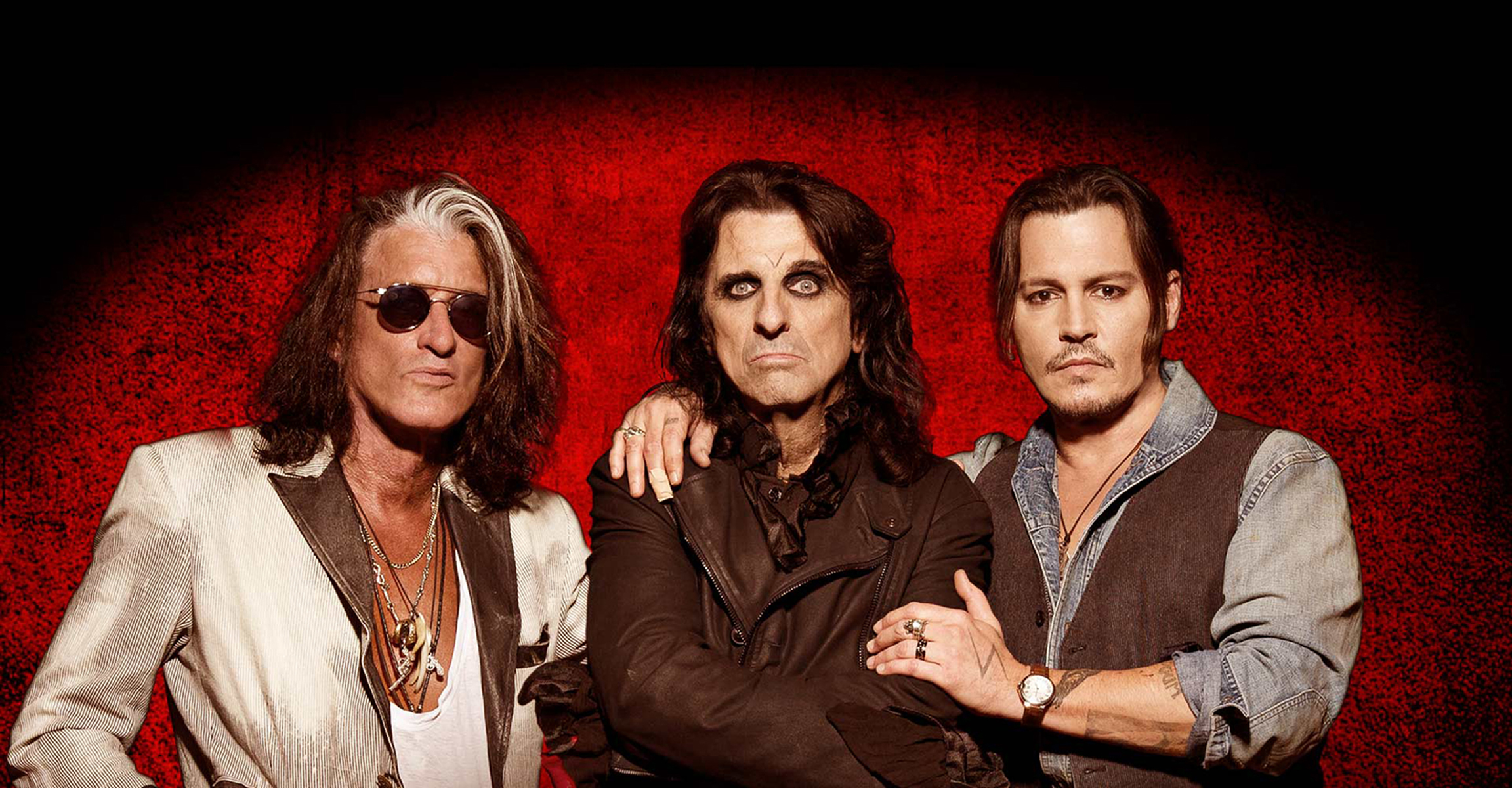 While HOLLYWOOD VAMPIRES is essentially a covers record dedicated to Alice’s “dead, drunk friends,” those delectable morsels are indeed bookended by a pair of originals… well, three, actually, with “The Last Vampire” acting as an introduction to the album, as well as to “Raise the Dead.” The short piece features Sir Christopher Lee reciting a vampiric lament from Bram Stoker’s DRACULA over a soundscape created by producer Bob Ezrin and Depp (with a little help from Justin Cortelyou). This may actually be Sir Christopher’s – forever Count Dracula to me – last performance before his death. “Raise the Dead” itself is the kind of song that Alice Cooper (the band) could have come up with. In fact, it’s so good that I’m a bit miffed that Depp had a hand in writing it and plays some pretty good guitar, to boot. One of Alice’s regular guitarists, Tommy Henriksen, also makes an appearance, evoking the memory of Glen Buxton and his psychedelic freak-outs. Current Alice Cooper drummer, Glen Sobel (who I thought was just mailing it in of late, particularly on the RAISE THE DEAD – LIVE FROM WACKEN release), also makes his first (recorded) Vampires appearance and, though he lacks Neal Smith’s percussive finesse, powers the tune along quite nicely. Along with bassist Bruce Witkin (who also gets a co-writing credit), he delivers a magnificently sludgy Zombie-like rhythm bed for the others to play over. Don’t you just love redemption stories? This early into the game, I’m already wondering what a full album of Vampires originals would sound like. So, now, it’s on to the covers. First up is “My Generation,” a song that the Coop has done off-and-on as an encore for a couple of decades with his tongue firmly set in his cheek. This salute to fellow Vampire (the drinking variety) Keith Moon is kind of a stripped down version for this group, with only bass, two guitars (again, Depp and Henriksen) and drums from the Who’s longtime skin basher, Zak Starkey (who I think is related to Paul McCartney or one of those other Beatle-type guys), who adds an extra bit of thunder to the proceedings. Zak sticks around to represent another of Alice’s departed drummer friends, John “Bonzo” Bonham, on Led Zeppelin’s “Whole Lotta Love.” The intro to the song is absolutely mesmerizing, with Alice’s harmonica and slow burn vocals bolstered by some awesome Kip Winger bass playing and Joe Walsh’s slide guitar before the song kicks in full force. AC/DC’s Brian Johnson joins in on vocals, singing some serious ear-damaging high parts (I initially thought that it may have been Ann Wilson singing) and hot-shot guitarist Orianthi (again from Alice’s band) adds a wicked solo. Holy crap, boys and girls… this one may actually be better than the original!

Walsh sticks around for a rousing version of the Spirit classic, “I Got a Line On You,” as does Winger on bass. Perry Farrell (of Jane’s Addiction fame, for you kids who don’t listen to the “new” music) joins Alice on vocals and longtime session drummer, Abe Laboriel Junior, shows us exactly why Paul McCartney keeps him on his payroll. This is a far better version than the hair metal version that the Coop did for the TOP GUN II soundtrack. Cooper, Depp, Henriksen, Witkin and Laboriel deliver fairly faithful versions of two songs from the Doors, “Five To One” and “Break On Through (To the Other Side),” with Alice channeling Jim Morrison’s Lizard King persona. Charlie Judge makes an appearance as Ray Manzarek while the legendary Robby Krieger (yeah… THAT Robby Krieger) absolutely tears it up on lead guitar. A nearly forgotten member of the original Hollywood Vampires, songwriter par excellence Harry Nilsson, is represented by a pair of his most well-known pieces: “One,” which Three Dog Night rode to the top of the charts (well… number 5, actually) in 1969 and “Jump Into the Fire,” from Harry’s 1971 masterpiece, NILSSON SCHMILSSON. Perry Farrell is back and Krieger continues to shred on the solos. Foo Fighters front-man Dave Grohl joins the festivities on drums… I guess old habits die hard. 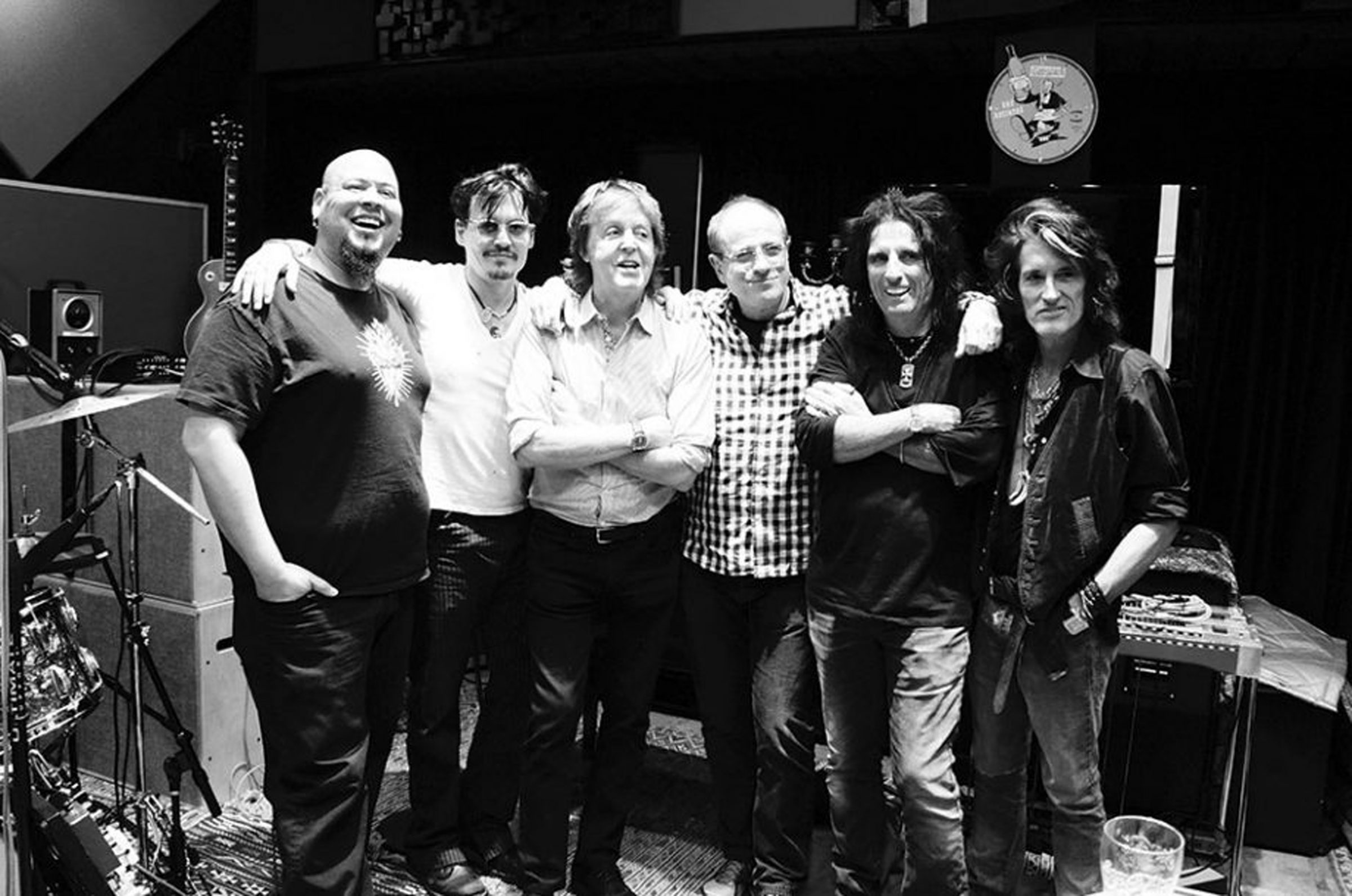 If you’ve ever wondered what a duet featuring Sir Paul McCartney and Alice Cooper would sound like, wonder no more. Abe Laboriel Junior’s boss lends a few of his many talents to the song that launched Badfinger’s career, “Come and Get It,” playing piano and bass, as well as singing. Joe Perry finally makes an appearance, joining the guitar frenzy alongside Johnny Depp. Alice, Tommy, Glen and Bruce get a bit funky with Marc Bolan on “Jeepster,” from the T Rex album ELECTRIC WARRIOR. Joe and Johnny add some glamorous guitar, as is only fitting. The same group also delivers a very heavy version of John Lennon’s “Cold Turkey,” with Perry soloing nicely. The heaviness adds – if you’ll pardon an unintended pun – weight to Lennon’s lyrics. While there may be better Lennon songs for the boys to cover, this is a really cool version of this one. “Manic Depression” sees the return of Joe Walsh and Zak Starkey to the studio. Though Jimi Hendrix was well-known for his guitar histrionics, this tune was more in line with the Rhythm and Blues he loved, with the fiery soloing replaced with a more riff-based sound that allowed Noel Redding and Mitch Mitchell a lot of free space to kinda go wild. Here, the Vampires do the same thing, keeping things simple over the top while Witkin’s bass rumbles and Starkey’s drums steamroll through the understated guitar work of Depp, Walsh and Henriksen. While it’s hard to beat the original ARE YOU EXPERIENCED version, this is one of the better cover versions out there. 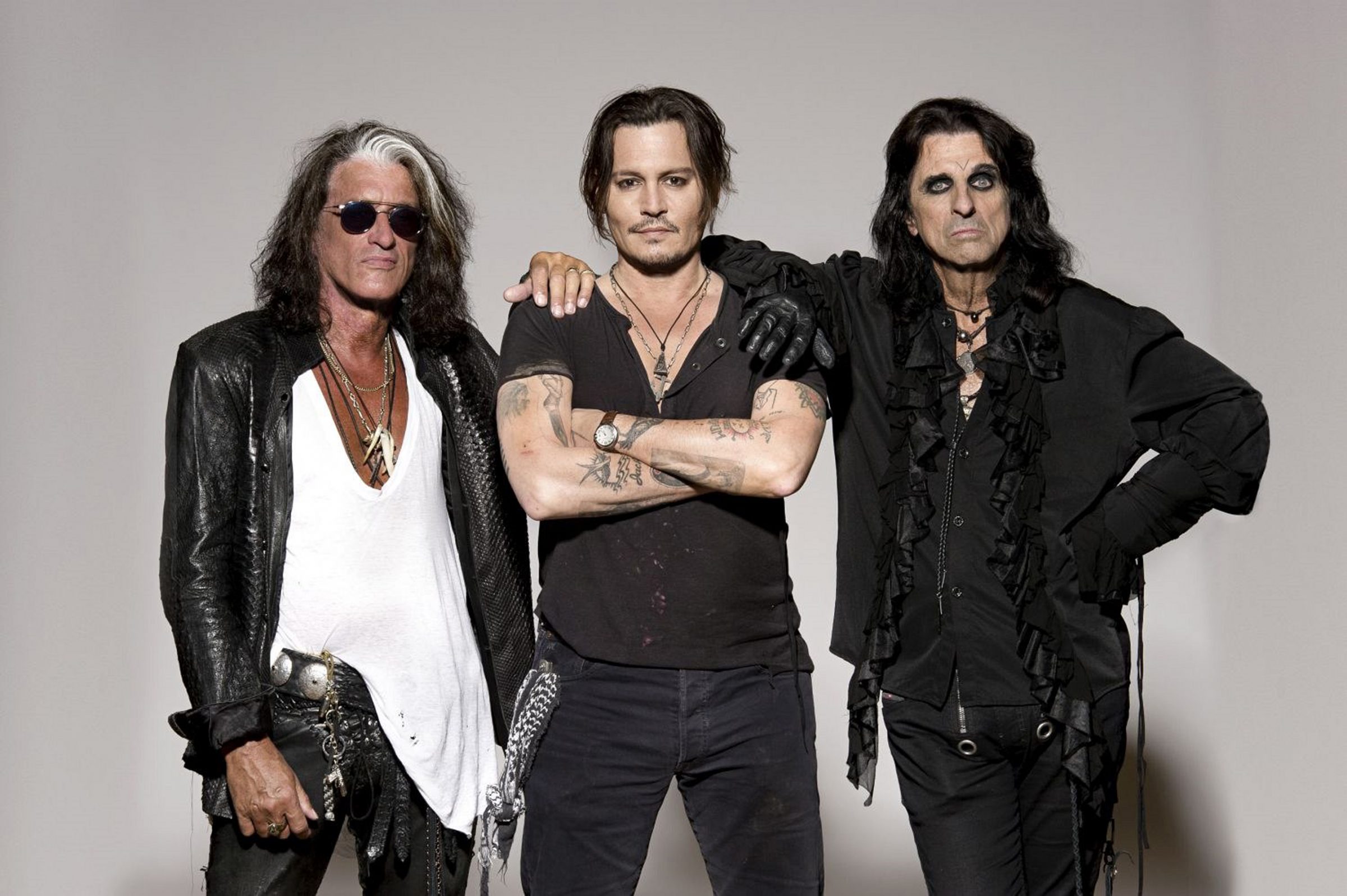 Alice goes mod with the psychedelic pop of the Small Faces’ “Itchycoo Park,” a weird sort of song for this band to try to tackle. But, you know what? They pull it off, with a wink and a nod to the whole “Peace and Love Through Altered States” late ‘60s mentality (and Alice’s – as well as Johnny’s – own well-documented bouts of altered states), especially near the end, when the music is brought to an abrupt, record-scratching end and Alice asks, “Uh… because I’m HIGH?” before the background singers bring us back around to the tune. Musically, Tommy does most of the heavy-lifting on guitar, though Depp proves himself a stand-out guitarist, as well. For quite awhile now, Alice’s solo shows have featured the no-brainer coupling of “School’s Out” with Pink Floyd’s “Another Brick In the Wall, Part Two.” The track bristles with electricity, as Brian Johnson returns to hit some high notes to counter balance the Coop’s growl and Slash and Joe Perry join Depp and Henriksen (oh… and Bruce Witkin, too) for some wicked soloing and a little slash-and-burn riffing along the way. And, of course, what better rhythm section to have behind this magnificent mayhem than two-fifths of the original band, Dennis Dunaway and Neal Smith? In an album of highlights, this may very well be my favorite, as the basic “School’s Out” groove weaves it way in and out of both songs. “My Dead Drunk Friends” is a tune that Alice has played for a couple of years now. It certainly puts a fitting exclamation point to the first Hollywood Vampires album, with the group pared down to the five songwriters (Cooper, Depp, Henriksen, Witkin and producer Bob Ezrin) and drummer Glen Sobel. The tune is a swinging waltz with a bluesy kinda sway and a Depp (I’m guessing) solo to match. It features a particularly snotty vocal from Alice as he toasts the carnage that drink and drug wrought on the original Vampires. The zombie-fied (or, should that be “zombie-fried?”) chorus and the wind-down fade, with Ezrin’s just slightly off-kilter tack piano, definitely add to the faux drunken feel of the song, highlighting the spirit – if not the reality – of those bygone days of stupefied revelry.

There is a “deluxe version” of HOLLYWOOD VAMPIRES out there, with three extra tracks: The Who’s “I’m a Boy” (seems a natural for Alice to sing), “Seven and Seven Is” by Love’s Arthur Lee (a song that Alice recorded back in 1981 for his SPECIAL FORCES album) and an original called “As Bad As I Am.” If, like most of us, you are digitally tuned-in, you can buy this digital album and pick up these tunes as a bonus. While much of the music I receive nowadays is of the digital variety, there is still something very special to me about holding an actual record in my hand and watching as the needle drops on that first track, especially with this release.