PART ONE: THE INTRODUCTION

Zombie minimalism. I doubt it will become a THING, as most audience members probably WANT to see oozing-faced members of the undead fraternity, ravenous for fresh flesh and single-minded of purpose. There is nothing discrete or casual about the way zombies behave (not that there is a rulebook on such), but director Jesse Thomas Cook (THE HOARD, SEPTIC MAN) deserves a spot on some future panel discussing the zombie cinema genre, which DEADSIGHT, after two years of industry machinations, is now a part of. It seems like Cook and his two stars, Adam Seybold and Liv Collins, are pretty familiar with zombie and plague movie lore, and mostly decided NOT to follow in the footsteps of George Romero, Danny Boyle, et al. They took their own restrained path, somewhat admirably. Cook, Seybold and Collins (who also co-wrote the script) gamely try to tell a suspenseful story in an idiom which has been done to death on both the big and small screen. Seybold plays an injured everyman, Ben Neilson, who has just had a tough eye operation, resulting in seriously impaired vision. He’s hoping to get back to his family soon, but something is terribly wrong. Ben is clearly at a disadvantage when it comes to skulking dead dudes who keep showing up hoping to snack on him. His only ally is a pregnant police officer who crosses his path, Mara Madigan (Liv Collins), taking it moment by moment in what is now a rural “zombieland.” The two must team up simply to survive. 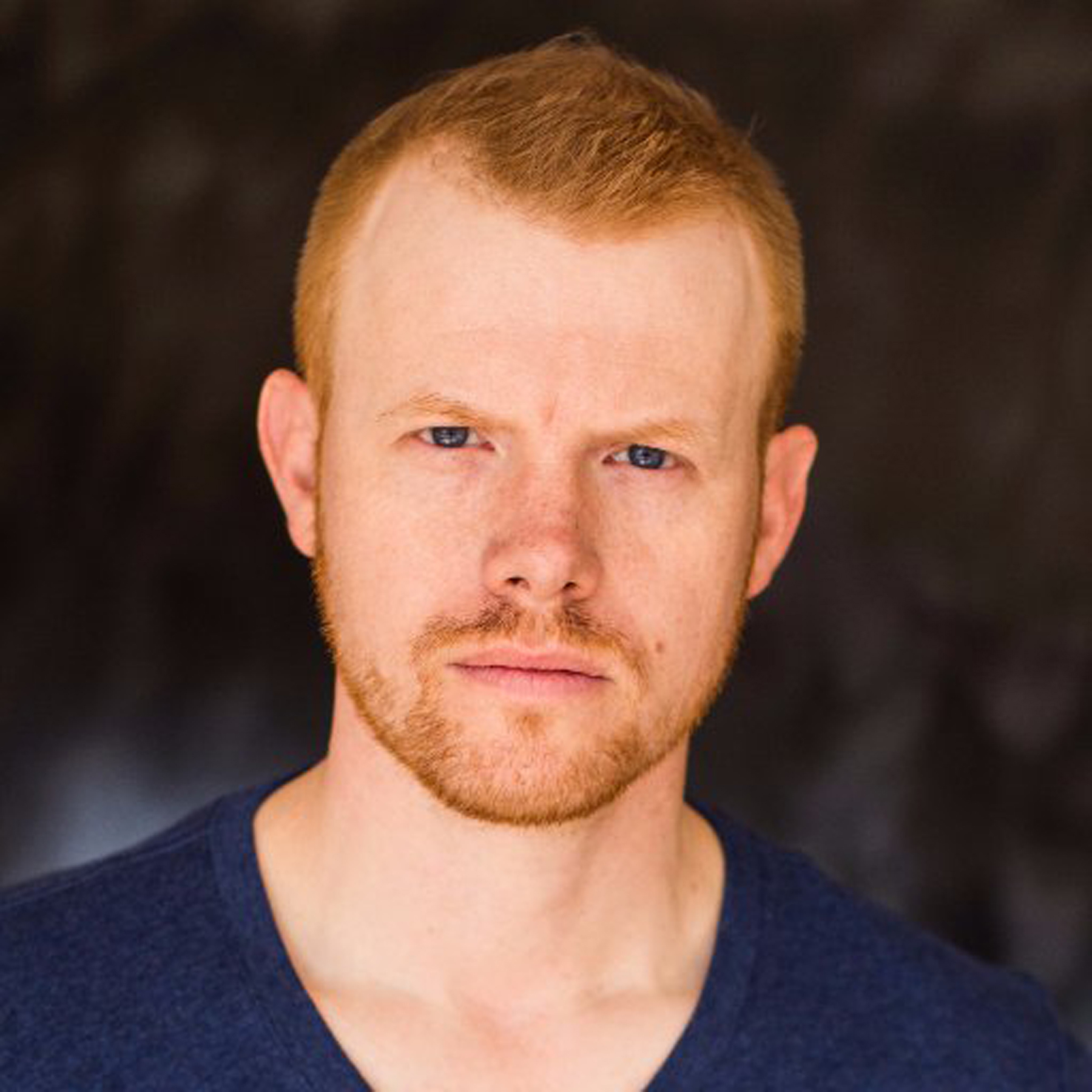 “For me the attraction of making a movie like this, is that you’re not really making a ‘zombie movie,'” said Adam Seybold, during a recent phoner, of portraying Ben with both vulnerability and determination. “I’m playing a regular person who is blind, trying to get back to my family. And I meet a woman who is trying to survive WITH me. That’s what we’re doing. All you can do is play the moment to moment truth of what is happening. There are only so many ways to show a zombie outbreak. In terms of explaining where they come from, we don’t really do that. Viewers are smart about that. There just happen to be zombies. It’s better to just let the story happen and use zombies as a backdrop.”

Oh, they’re a bit more than a backdrop. Poor Ben never knows when he is gonna hear erratic footsteps behind him, and have to fend off another attack. Mara has the firepower, however, and Ben wants her close by at all times, especially when he learns she is pregnant.

“Liv was actually pregnant during the shoot,” he revealed. She was exhausted much of the time. But she was such a trooper. I’d say, ‘You should be at home resting instead of running around with a double-barreled shotgun!”

The two have an easy rapport on screen, despite the rather minimal dialogue. They previously appeared in CREEP NATION together, which Seybold described as a “PSYCHO for the modern age.” In DEADSIGHT, they often spent rainy, cold days on set trying to crack jokes and keep each other grounded.

“She’s one of my favorite co-stars,” he said. “We’ve worked together a couple of times. It makes those transitions (from off-camera waiting to ACTION) easier. Some actors save it all for the camera. But Liv and I are chatty by nature, so we’d try to crack each other up between scenes. It makes such a difference when you are comfortable with someone, and you can trust each other.”

How did Seybold prepare for such a challenging shoot? After all, he has gauze wrapped around his eyes for most of the film, and there are scenes of him attempting to make his way up steep hills or maneuver through the rooms of an unfamiliar house. Seems dangerous!

“As much as possible I tried to limit how much I could see,” he said. “Unless there were obvious safety issues. I’m sure there’s hours of outtakes Jesse has where I am wandering out of the shot or something. But when your eyes are closed, you’re not really acting anymore. You might be truly in danger. I think that’s why we make horror films. It takes you to that edge. Sometimes it’s miserable while you’re IN it, the frustration of not being able to see. But I chose that situation ‘cause it does take you beyond the limit. My day job is a writer, and I don’t have those concerns. My biggest decision is, am I gonna have tea or coffee?”

I commented on the surprisingly minimal action for a zombie movie, and the rather austere look of the film. Did Seybold sense it was going that way when they were shooting? “I haven’t actually seen the finished film yet,” he responded. “We shot it two years ago. I think that initially, Jesse told me, they had something a little more comedic in mind when they conceived it. That was the vibe before Liv and I. But based on our skill set, it was the way we acted together that changed the movie. Stemming from the vulnerability of these two people. So I guess the acting and direction ended up becoming more naturalistic.”

While films such as DAWN OF THE DEAD and ZOMBIELAND seemed to take pleasure in featuring gorey closeups of the dead either having flesh fiestas or getting blown to smithereens, DEADSIGHT avoids that kind of thing for the most part. Yet it is still suspenseful, and the zombies are in some ways even more believable as a result.

“They are what makes the movie,” agreed Seybold. “If the zombies don’t work, the whole thing falls apart. It’s a credit to the tone that it worked so well.” An early scene of a “transitioning” woman confronting Officer Madigan near her police car is rather unsettling; you don’t know what to expect, and Collins plays it that way. But creepier still are shadowy figures showing up a distance from Ben and starting to shuffle towards him. This sort of thing is almost never good in horror movies. And having Ben be virtually blind is an undeniably interesting touch. But whatever DEADSIGHT’s strengths, it’s unclear if audiences will discover such a “subtle” tale of the undead.

“That’s out of my control,” said Seybold. “I don’t know about niche. I’ve done enough things now where I play the game of how things will be received. You can’t write a hit on purpose, or by accident. It’s been two years since we shot the movie. It exists in a time when I was with those people. I had a great time working on the movie. Those people are my friends, like brothers and sisters. And that’ll be true, whatever the outcome.” 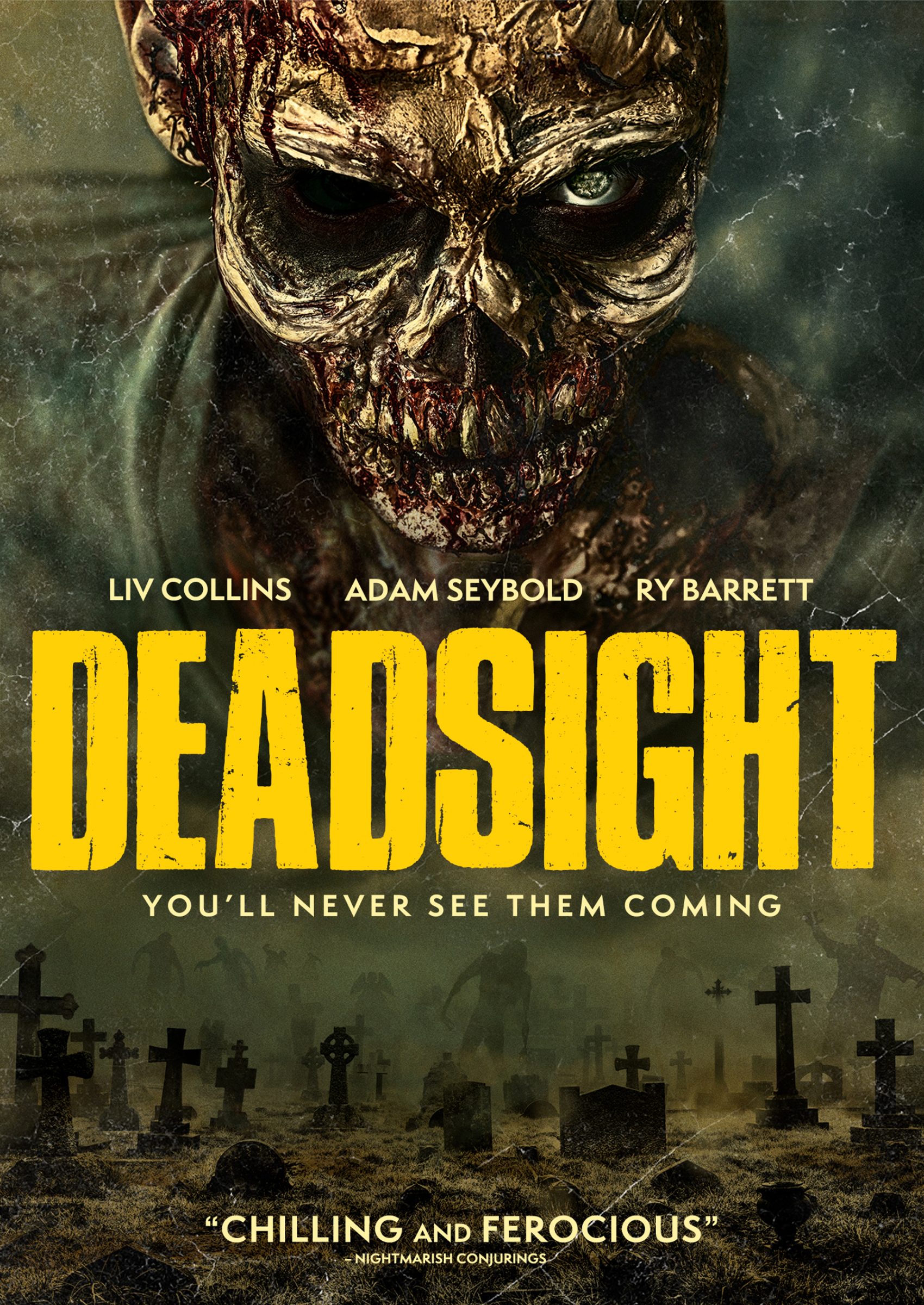 I’m a fan of minimalism, I gotta admit. And when you’re talking about a cinematic genre as inherently goreworthy and unhinged as zombie horror, it’s admirable if a director does NOT aim to out gross-out the likes of DAWN OF THE DEAD, 28 WEEKS LATER, WORLD WAR Z, TV shows such as THE WALKING DEAD, et cetera. Honestly, the restraint shown by director Jesse Thomas Cook in lensing this modest production was the first thing I admired.

The film opens with a partially blind man, Ben (Adam Seybold), awakening in a hospital disoriented about where he is and what the hell is going on, a story element borrowed from Danny Boyle’s classic 28 DAYS LATER. Ben’s eyes are covered in gauze wrap, and he knows enough to put drops in them periodically, but everything is quite blurry. And rather than staying put, Ben decides to wander around and see what he can suss out from his surroundings. This is not a wise choice, as periodically a shadowy figure will appear behind him or come out of nowhere, and these of course are the undead. Weirdly, they often take their time in stalking and trying to dine on Ben, which tends to give him opportunities to hide or whack the living shit out of them with his little walker weapon. Ben seems a little too bold and clever for this story, and I found it hard to believe he could just walk up hills and locate empty houses as easily as he did having very little of his eyesight to aid him. But I don’t fault Seybold as an actor; he’s reasonably effective, and not overly emotional in his portrayal.

It’s a lonely journey for Ben until a female… and rather pregnant police officer named Mara Madigan (Liv Collins) crosses paths with him. Mara has had a few zombie encounters of her own, and it’s probably best that we don’t get much exposition of how this particular apocalypse came about and why Mara ended up the lone officer on her force, pretending to do her job when the only sensible pursuit is terminating these ugly zombies with extreme prejudice. There is an interesting scene early on where Mara confronts a female almost-zombie, and it’s almost poignant. Somehow the hapless officer allows the transitioning undead missy to get in her squad car and drive off. That struck me as ludicrous… wouldn’t she have shot the fuck out of her before she could get in the vehicle? And how far can you get as a soon-to-be-undead citizen, already drooling and covered with oozing sores, behind the wheel of a car? These questions are not answered; Officer Madigan continues rather calmly on foot, and reaches Ben just in time to blast a hungry fiend before it could snack on the hapless sight no-seer. Whatever tension that remains at this point comes from the cautious relationship between Ben and Mara, which is underplayed and not as well scripted as it ought to be. Still, the actors are watchable and grounded in this peculiar reality. There are no dumb speeches, and thankfully, no romance. But the two do care about each other, and Ben shows plenty of compassion upon learning that Mara is preggers.

Each zombie kill is distinct, and there are no scenes of hordes of ravenous undead descending upon our heroes, as is usually typical of these films. It’s actually a fairly quiet drama overall, with little or no excess gore. And I want to say that the cinematography is a bit better than you might expect. That is thanks to a guy named Jeff Maher, who films the empty, half forested landscape (probably the eastern US) with a disarmingly pastoral sweep, making you notice the trees and the winding rural roads at all times, so that when a creepy figure emerges from a roadside in the background, it has maximum dramatic effect. Also the film pays attention to how many bullets Officer Madigan has in her gun, a detail I appreciated. And the script counts Collins as a co-writer and producer, so bully for her for committing to every aspect of this movie. I give it points for underplaying what is normally the type of horror that absolutely goes for broke in the gore and/or black comedy department (as ZOMBIELAND did). The music score is restrained, the action is selective, and I admire the fact that very little is explained.

This ends up being a minimal two-character drama overall, and I can’t name another zombie movie you can say that about. It’s pretty suspenseful, and I was not bored by DEADSIGHT, which I sort of expected to be. It’s made with attitude and an understanding of its cinematic template, while seeming determined to avoid most of the cliches of the genre. Sure, it has a few screws loose, and I would have written a few more soul-sharing conversations for the two leads, but DEADSIGHT moves briskly and economically through its contribution to a genre that would seemingly have little new territory to explore. And that’s a “dead sight” more than you have a right to ask for.

The flick is available on DVD, Digital HD and Video-On-Demand beginning Tuesday, July 2.